I groaned as I started to pack my suitcase. Seattle forecast? Rain, followed by a little more rain. As a native San Diegan, we have a love-hate relationship with rain. We desperately need the rainwater due to our ongoing drought, but the honest truth is that we simply don’t like getting wet or our cars spotty. I shoved my previously un-used umbrella and raincoat into my tiny suitcase. My husband and I were off for a two night romantic getaway, so rain actually didn’t sound so bad.  Cheered by the thoughts of hot coffee and cozy bistros, we boarded our non-stop Alaskan Air flight to Seattle.

Upon landing over green and foggy Seattle, sunbeams blasted through various parts of the city highlighting the beautiful trees loaded with autumn leaves of oranges and gold. As we arrived mid-day and the sun just happened to fighting its way out, we decided that now would be a great time to do the Space Needle to take advantage of the clear view. 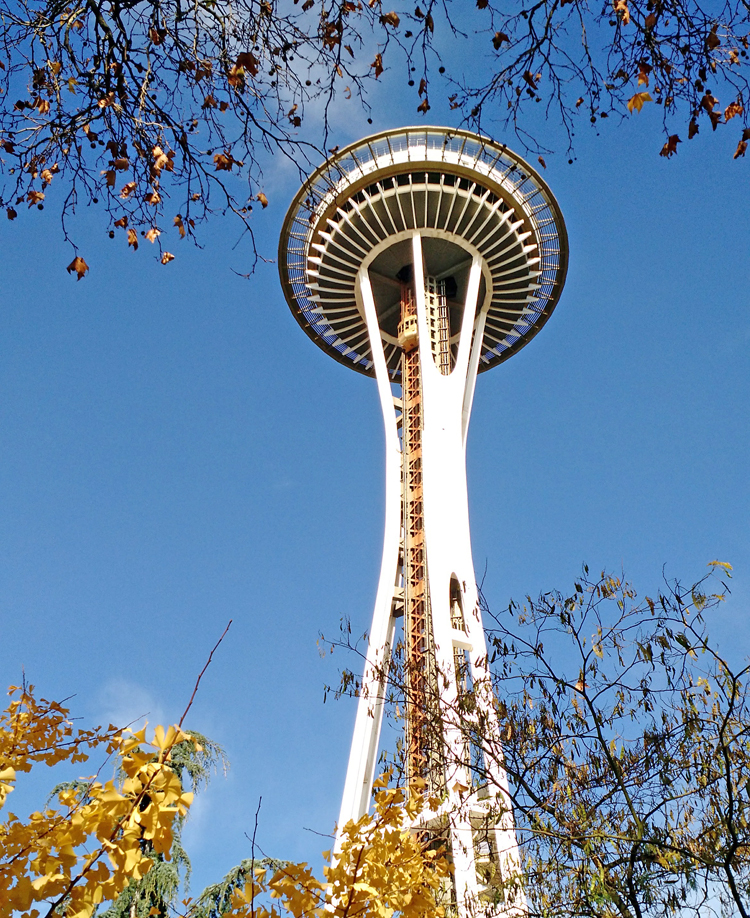 As luck would have it, it was also not very crowded in the Sky City Restaurant at the top, so we were able to get in with a last minute reservation. Note: Don’t chance it – if you would like to eat in the rotating restaurant, call ahead and make a reservation. The restaurant view was breath-taking and the food was also very good. Enjoy a glass of wine before going to the very top observation deck. At least I needed a glass of wine because I’m not a super huge fan of heights. However, the way the structure is set up I felt very comfortable — and it was nice to know there is an additional bar at the very top should I have needed additional liquid courage.

After descending from the Space Needle, we headed over to the Chuhily Glass and Garden Museum next door. This is a DO NOT MISS museum. The glass sculptures pop with color and light, especiallly in the outdoor atrium and gardens, constrasting against the rain forboding sky. It’s a beautiful oasis and Chuhily’s artwork melds perfectly into Seattle’s vibe.

It was starting to get dark, as we’re on daylight savings time now, so we decided it was time for a nosh – but just not any little snack. On Thursdays, the Seattle Caviar Company does caviar tastings with a glass of champagne for $30. I think I found their company website aptly named caviar.com a few years ago, and have obsessed about this visit ever since. Our hostess was so sweet and explained the differences in the caviar.

The tasting also comes with an informational sheet that you can put notes on, or take with you. Ironically, my most favorite (reasonably priced) caviar is actually the White Strugeon California variety. Sorry, Russia It had a lovely balance of cream, salt and slight nuttiness. I could have eaten a few ounces of that all by myself with some creme fraisch and toast points!

After a great night’s sleep, we searched the sky for guidance as to the day’s activities. It was dark and forboding. I pulled out the unused umbrella and jacket and decided today was the day for our wet Seattle experience! A large part of Seattle’s coastal downtown was built on top of the original historic city that had burnt down in 1889.  This underground city with caverns and passageways remained relatively forgotten and abandoned until a man named Bill Speidel rounded up civic interest in the 1950’s and launched the first Underground Tour. 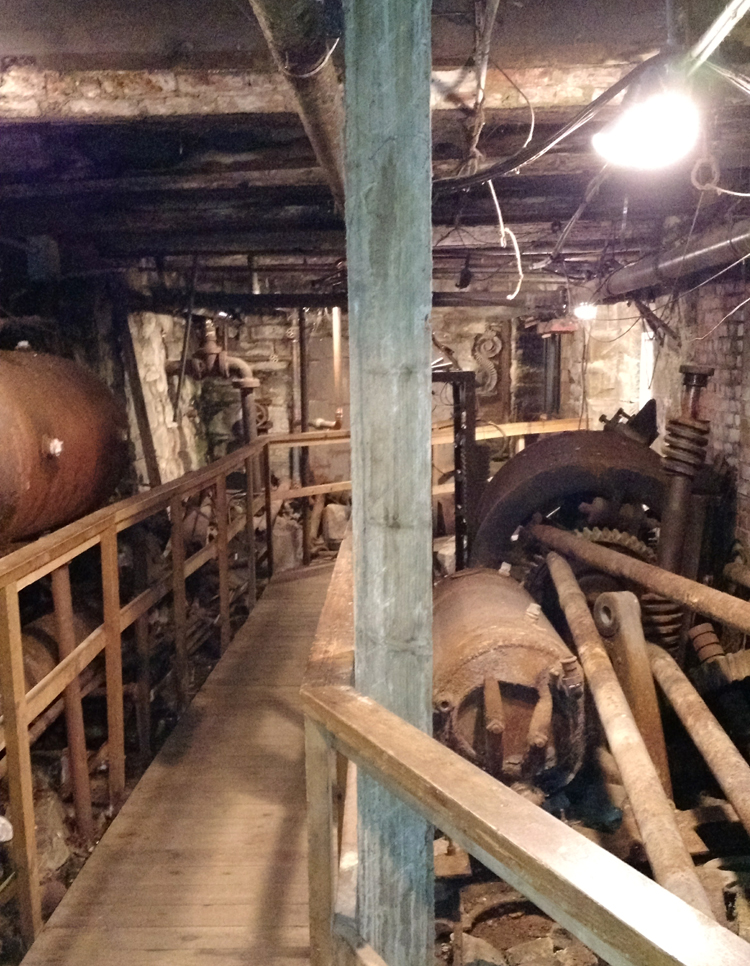 The walking tour is about an hour and that includes a fifteen minute talk at the beginning whereby it was allowed (and encouraged!) to have a Bloody Mary.

After the fire, which destroyed some 25 square blocks of mostly wooden buildings in the heart of Seattle, it was unanimously decided that all new construction must be of stone or brick masonry. The city also decided to rise up from the muck in which its original streets lay.
It was this decision that created the Underground: The city built retaining walls, eight feet or higher, on either side of the old streets, filled in the space between the walls, and paved over the fill to effectively raise the streets, making them one story higher than the old sidewalks that still ran alongside them. The abandoned city has been home to everything from gambling halls and prostitution houses to occupation by the U.S. Military during World War II! 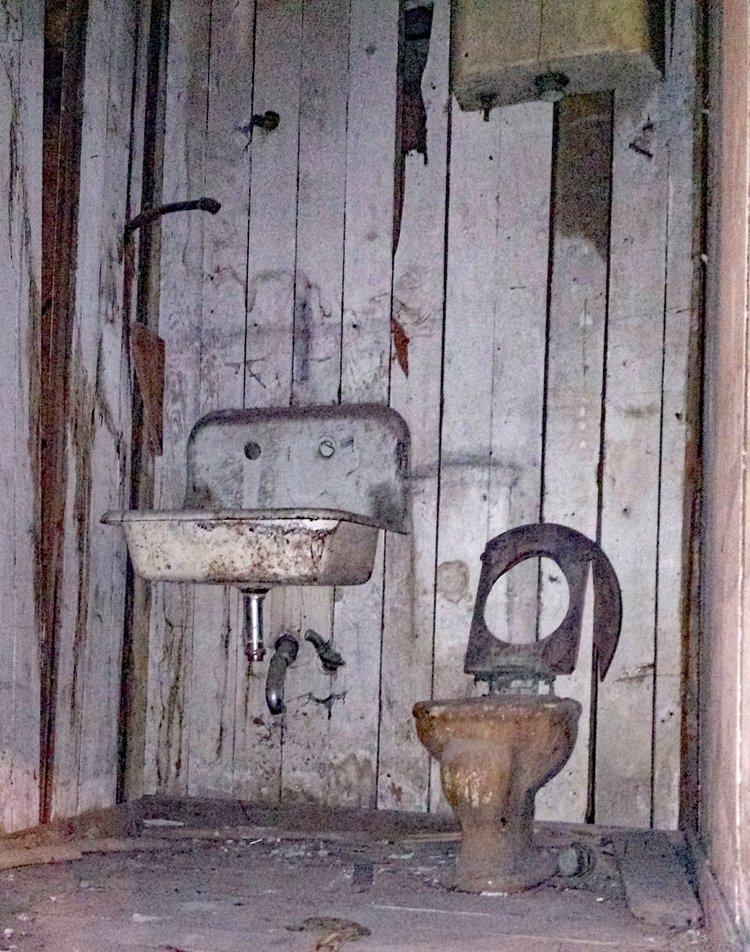 This is a must-see tour. It’s fun and it really information on Seattle’s colorful history.

I was starting to get a little concerned at this point in the day. Why is it not raining?  We headed over to the Public Market to grab some lunch and check out Seatttle’s busiest tourist attraction. 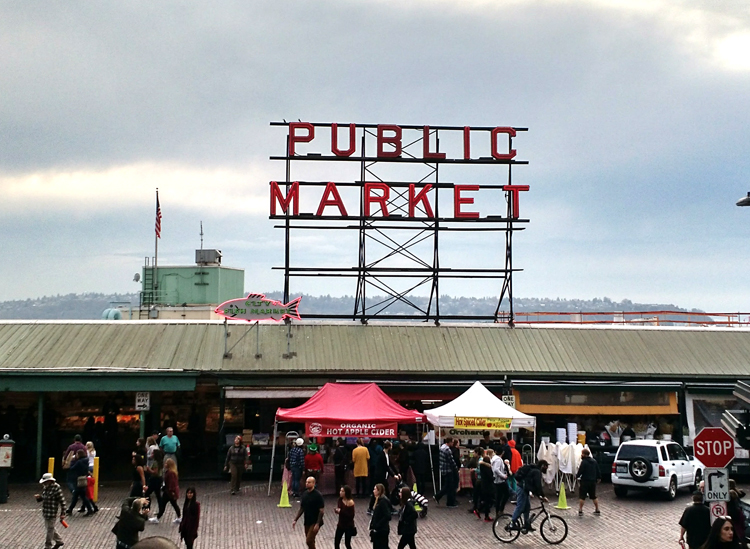 Things to buy at the market:

Jams – There are tons of pacfic northwest berry combos and they make great gifts to bring home.
Flavored Pastas – Every combo you can imagine! We bought home a chocolate raspberry spiral pasta.
Cheese – Beecher’s Cheese is across the street from the Pike’s Place Market. Stop in and get some fresh cheese curds!
Flowers – Arrangements are plentiful and inexpensive! At this time of the year, they are creating many floral combos with ornamental kale. 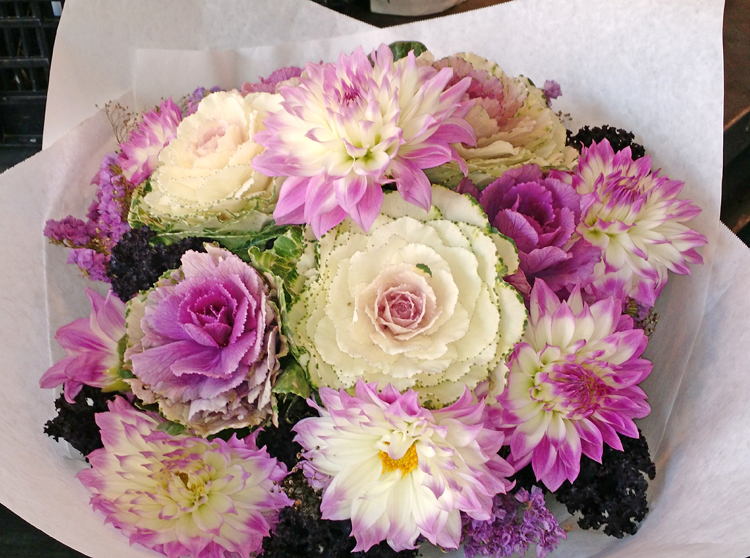 Watch the fishmongers throw fish and sample fresh fruit. Then try to snag a seat at one of the tucked in seafood restaurants at Pike’s Place. I enjoyed a spicy fish chowder while admiring this stuning view! 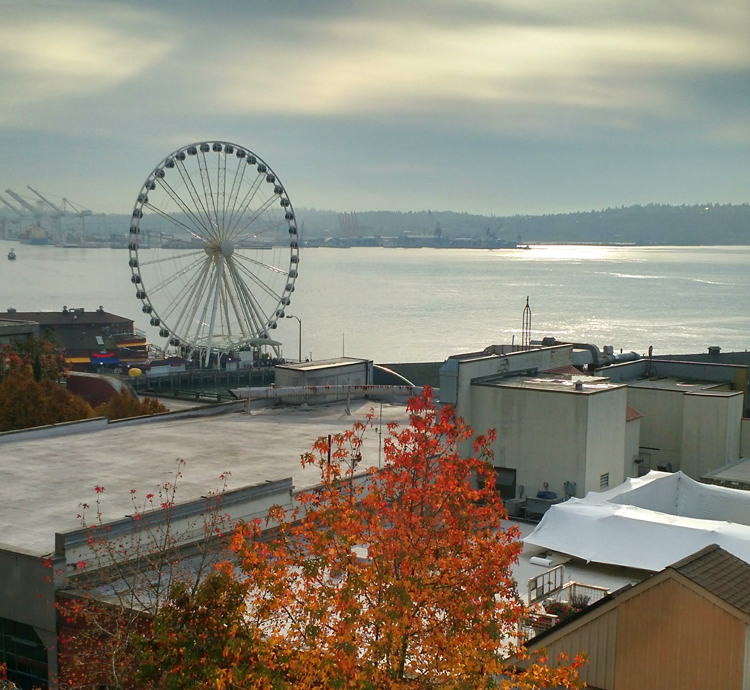 As we had to head back to the airport the next day, I mapped out some ideas that were enroute to the airport. Georgetown is a funky little hipster down full of art, candy and beer. Sounds like a great stop, right?

Oh, did I mention they have a small bar loaded with pinball machines and 80’s video games? Fancy chocolate abounds at the beautiful Frans Chocolate shop with it’s high industrial ceilings. The chocolates are in a beautiful encasement in the front shop that resembles a high end jewelry shop. Watch the chocolate makers in action in the back room! Tours are given mid-week at 11AM. 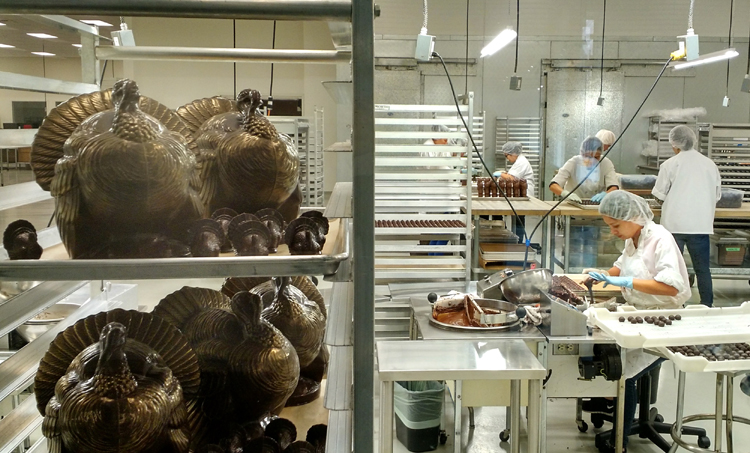 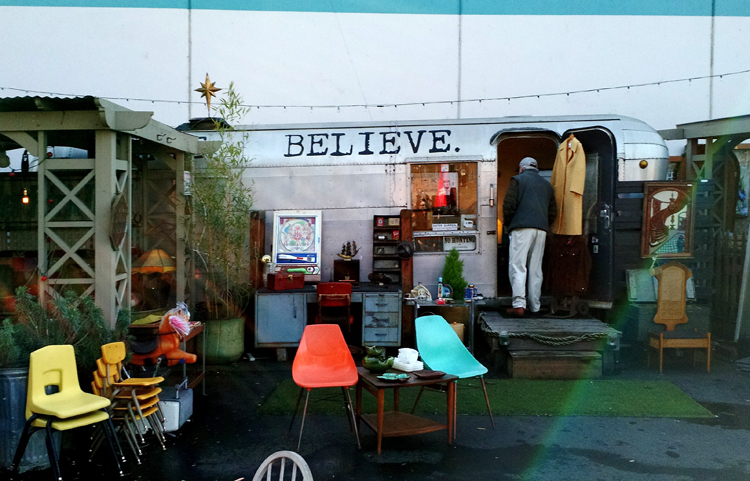 Georgetown was a fun stop and should not be missed if you have a couple of hours to spare on your back south to the airport at SEA-TAC.

Last stop — by the way, still no rain. I actually WANTED it to rain!  I finally packed it back in my suitcase at this point.  We had another hour to kill, so we stopped at the Fukuoua Japanese Gardens. This 14 acre oasis is tucked away in a neighborhood of homes – don’t let the location put you off. The meandering trails through the gardens weaved through many versions of maples and other seasonal trees exploding with color. 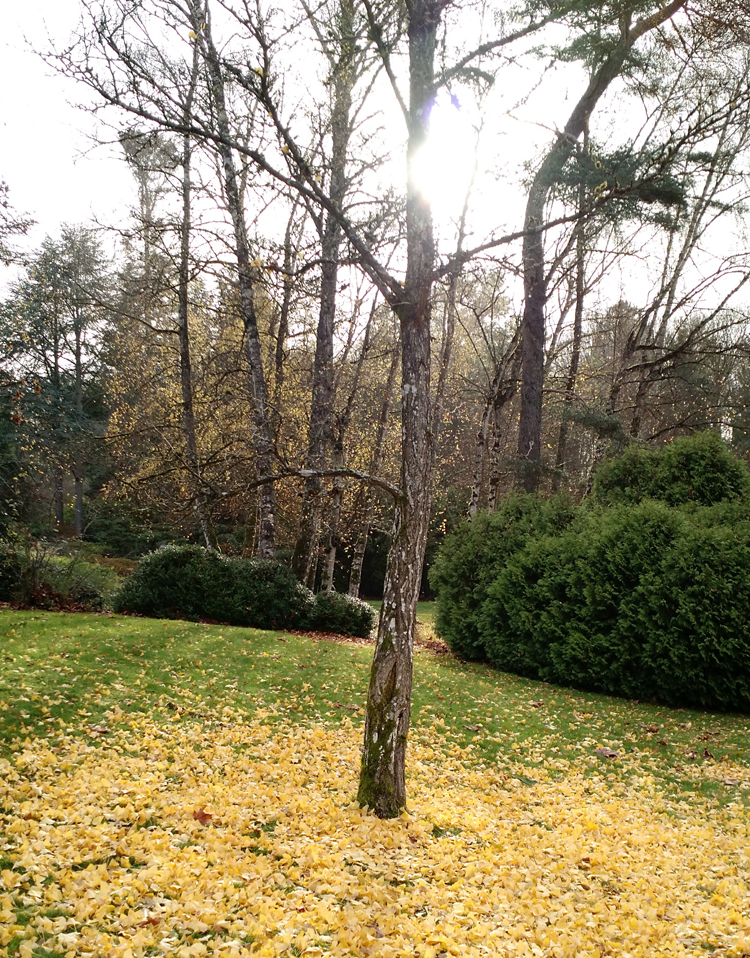 The gingko trees have all but lost their brightly colored yellow leaves, which contrasted beautifully on the lush green grass.

Although we were only in Seattle 48 hours, we definitely crammed in a lot of fun, delcious food and beautiful sights. Don’t be put off by the Fall/Winter months – it’s gorgeous, weather delightfully crisp – and heck, it may even rain for you if you’re lucky enough! 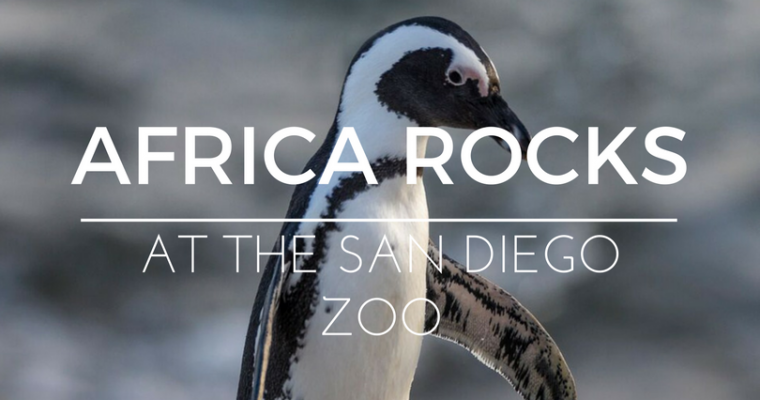 If you live in San Diego, or are coming to visit America’s Finest City this summer, you simply must see the San Diego Zoo’s latest habitat exhibits – Conrad Prebys Africa Rocks. 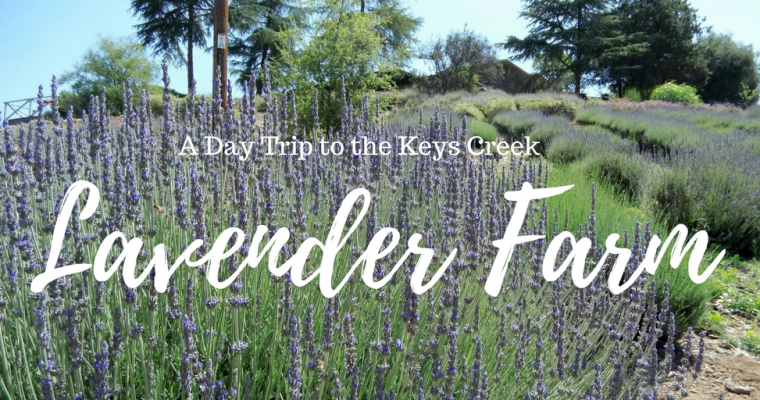 I hijacked my own Mother’s Day this year. I love sleeping in and having breakfast in bed and all, but traipsing around a farm on a Sunday morning sounded so much more fun! Forcing my sleepy family to get up, get dressed and get on […] 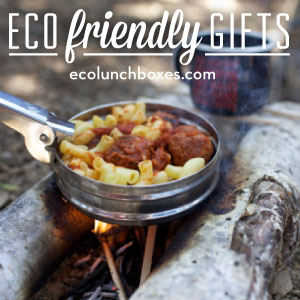