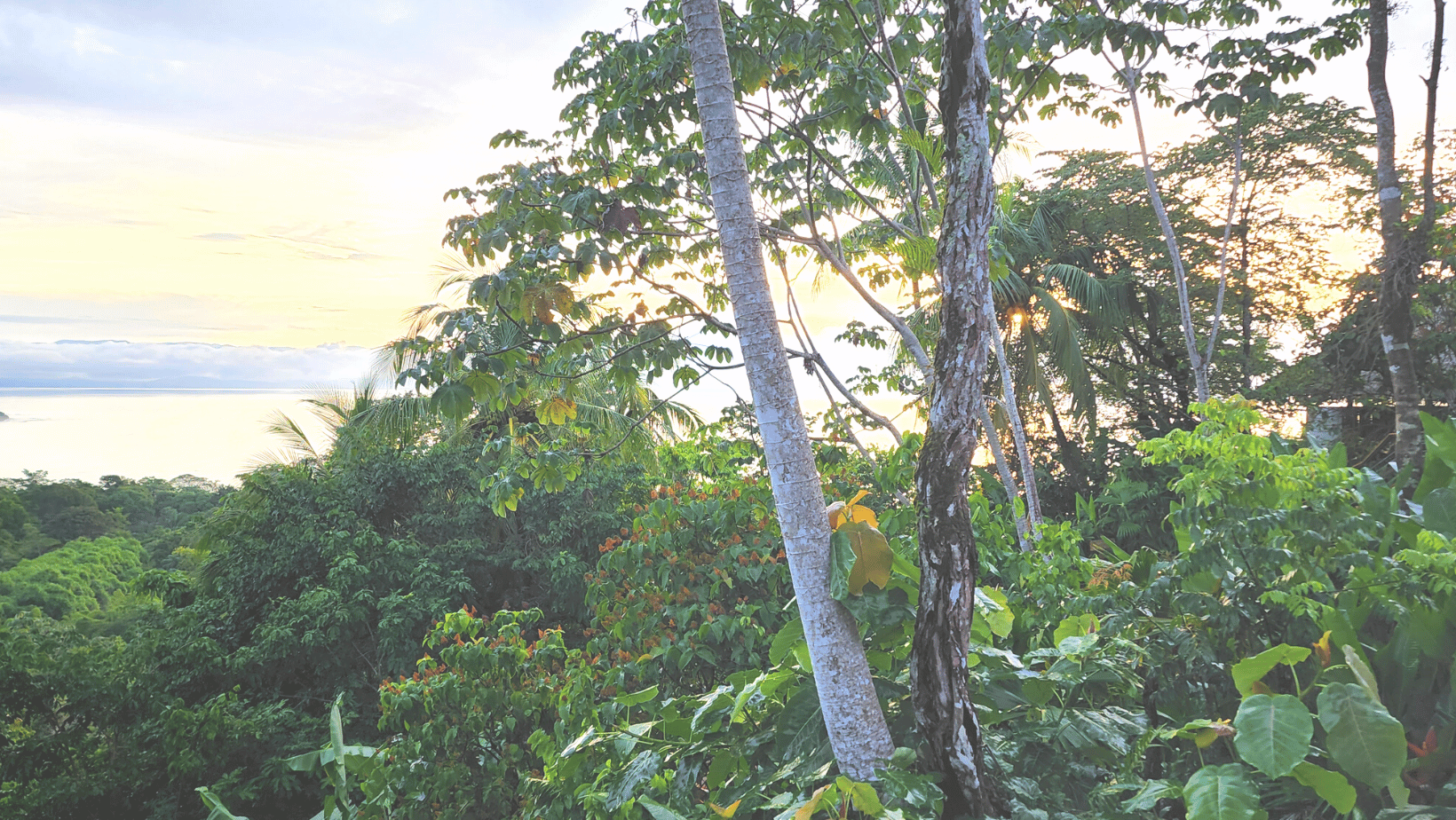 If you LOVE nature and are not intimidated by curious monkeys on your deck, or perhaps a stray tarantula in your room, read on. If you are anti-bug, anti-reptile, and overall not in love with critters close up, then click away – this trip is not for you.

Let me preface this by saying that I don’t love having to shake out my shoes to check for a wayward scorpion, but in order to truly get up to the most beautiful lush tropical jungle and all of its inhabitants, it’s necessary and totally worth it. As they say, sometimes the places that are hardest to get to are the most beautiful.

Last summer we decided to go to Costa Rica for a 10-day trip. We knew it was ‘rainy season’ and were fully prepared to be wet, constantly. However, rain can bring out nature’s best so if you’re an outdoor enthusiast, this is an excellent time for wildlife viewing.

We traveled VERY far South to the Osa Peninsula in Costa Rica on a tiny Sansa charter flight.  The Osa Peninsula is a peninsula located in southwestern Costa Rica, in the Puntarenas Province, with the Pacific Ocean to the west and the Golfo Dulce to the east. Again, not for the faint of heart if you’re scared of flying. The pilots were probably my daughter’s age, however, they were completely professional and the scenery was mind-blowing. Traversing over the pure thick green jungle, banana plantations and deserted beaches was pure eye candy from the air. When we arrived at the tiny airstrip in the middle of a beach town, we were picked up by a polite driver and driven on an incredibly bumpy road for about an hour. The rainy season wreaks havoc on dirt roads, so slow and steady was the key to getting there. However, we weren’t in a rush – the journey there was worth it. We saw bands of monkeys, beautiful parrots, farms, land that is being transitioned back to a natural park, and locals just living their wonderful jungle lives. The locals refer to this drive as a ‘Costa Rican Massage’ as you will bump your way just about anywhere when off the beaten path.

Upon arrival at the luxurious eco Lapos Rios Resort, we were welcomed with fresh passion fruit cocktails and juices and given information about the hotel.  They brought our bags to our room which was super as the only way to get to our rooms was to walk on a long wood ‘boardwalk’ in the sky.

Honestly, I was a little overwhelmed. I was walking on top of a rainforest to get to my room high up among the trees.  I was trying to focus on the steps going down, but it was nearly impossible as everything around us was alive. The trees were moving and squeaks and chirps indicated that we were being watched.

Our rooms were open to the outside environment, with the walls being screens. 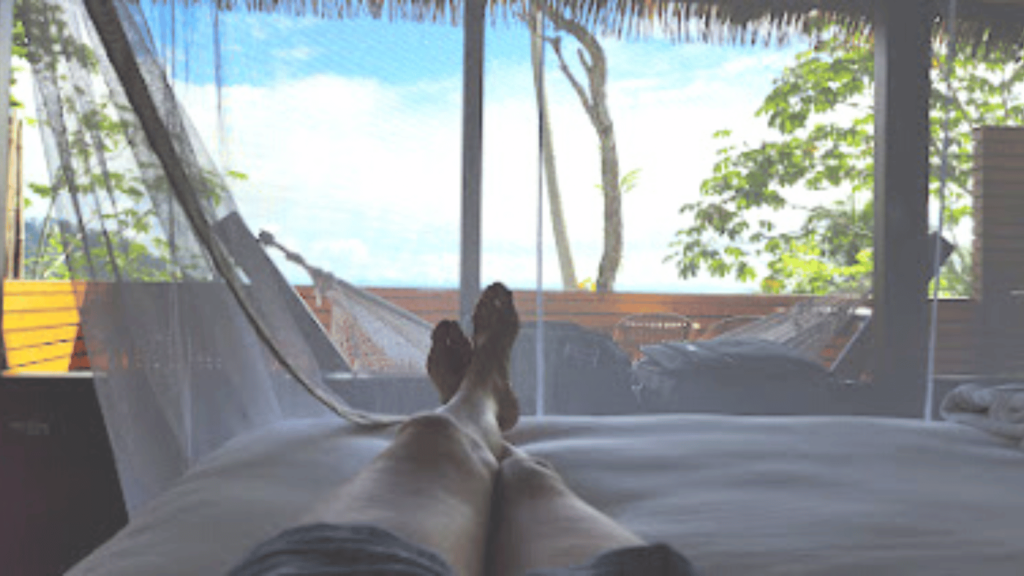 There are only walls in the bathrooms and the back of the units facing the paths. Otherwise, your rooms are WIDE open to nature! 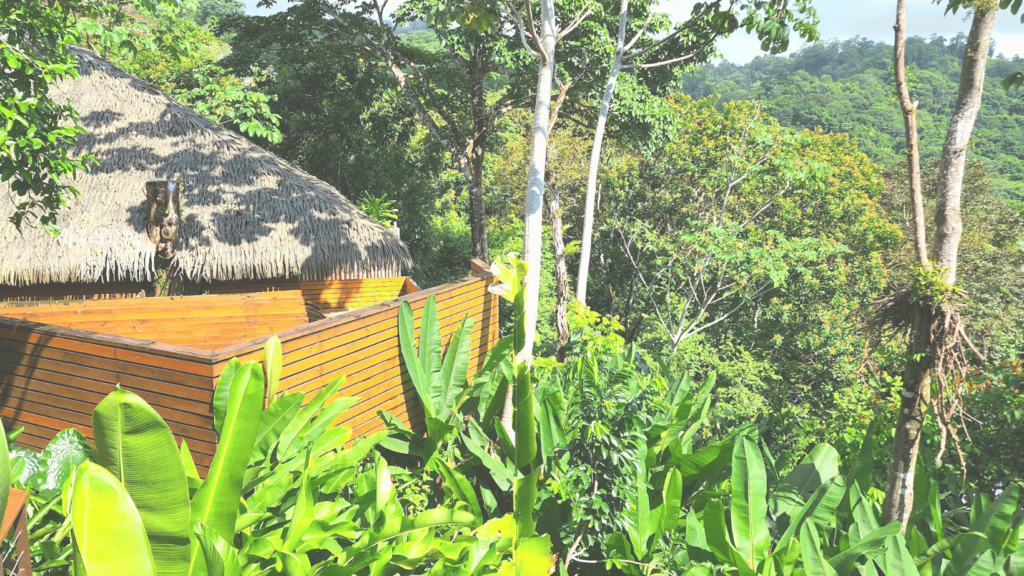 We could literally lay on our beds, or sit on the deck and nature came to us all day and night.

There are four types of monkeys that roam around the property and surrounding protected, Corcovado National Park, Howler Monkeys, Capuchins, Spider Monkeys, and Squirrel Monkeys. 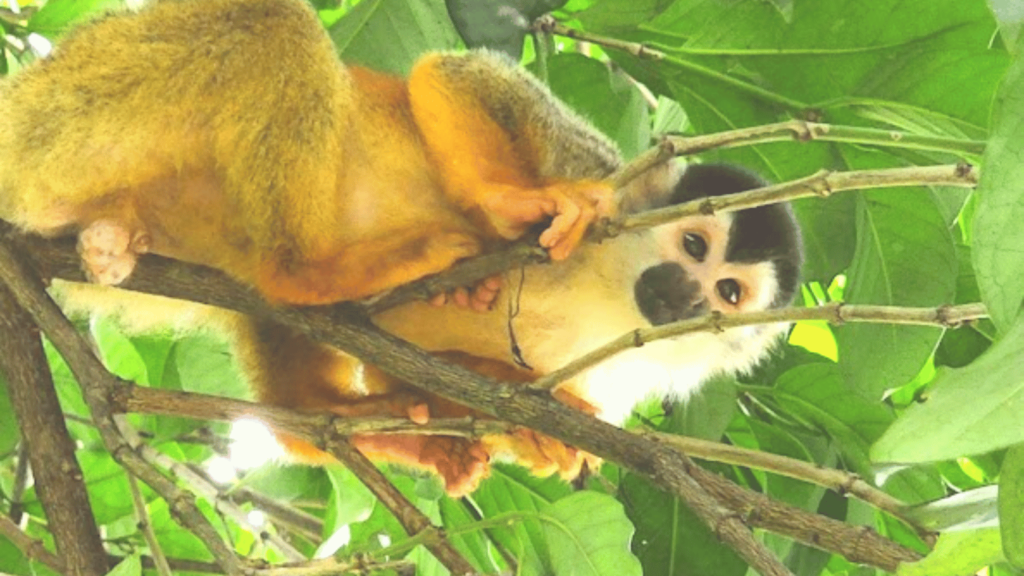 By the end of our stay, we knew the difference between them instantly as we became well acquainted! Band of monkeys will traverse your path all day long and not only do they look different, but they make different sounds and have different personalities. The shy yet inquisitive little squirrel monkeys were my favorite! 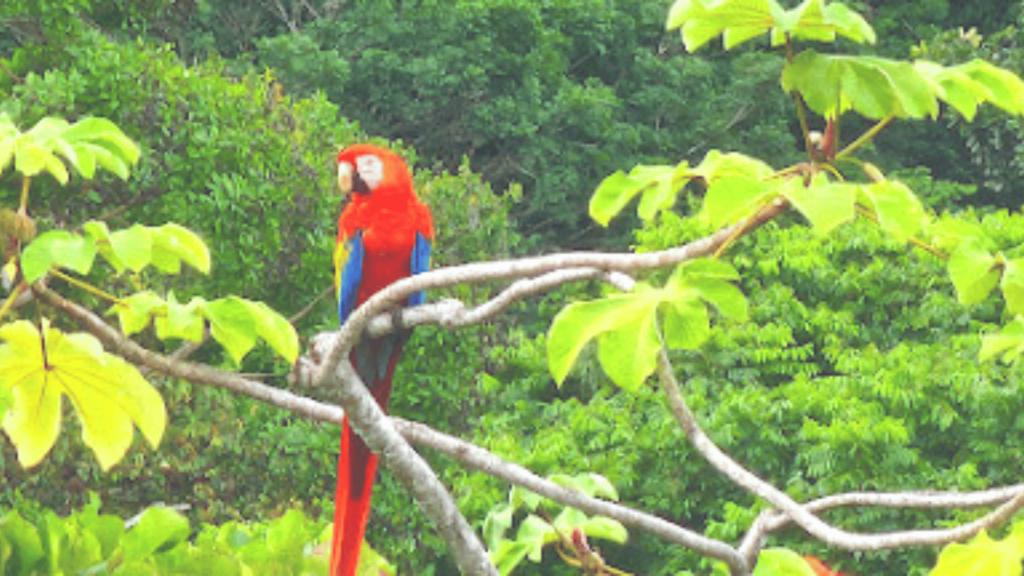 Colorful red macaws would come in to roost and tell us about their day, cheeky toucans would bop in to say hello, and little squirrel monkeys would come feast on the fruit trees next to our rooms. One naughty monkey did poop up in the trees above us and my husband got nailed, so always look up! I may have scared the monkeys away because I was laughing hysterically, or maybe that was the monkeys laughing too. 🙂

There’s no need for an alarm clock in the jungle. Just before sunrise (around 5 AM), the howler monkeys will make themselves known by ‘howling’ their low guttural and very loud call. The sound is unlike anything we’ve ever heard; it was very ‘Jurassic’. In the dark of the early morning, it felt as if a tyrannosaurus rex would going to bust into our room at any moment and it was exciting. I later learned that Steven Spielberg actually used the howler monkey sounds in filming the sounds for the dinos in Jurassic Park!

Not only were our delicious meals that are locally sourced included at this resort, but there were nature guides available to take us on daily tours of the area, mostly by foot. 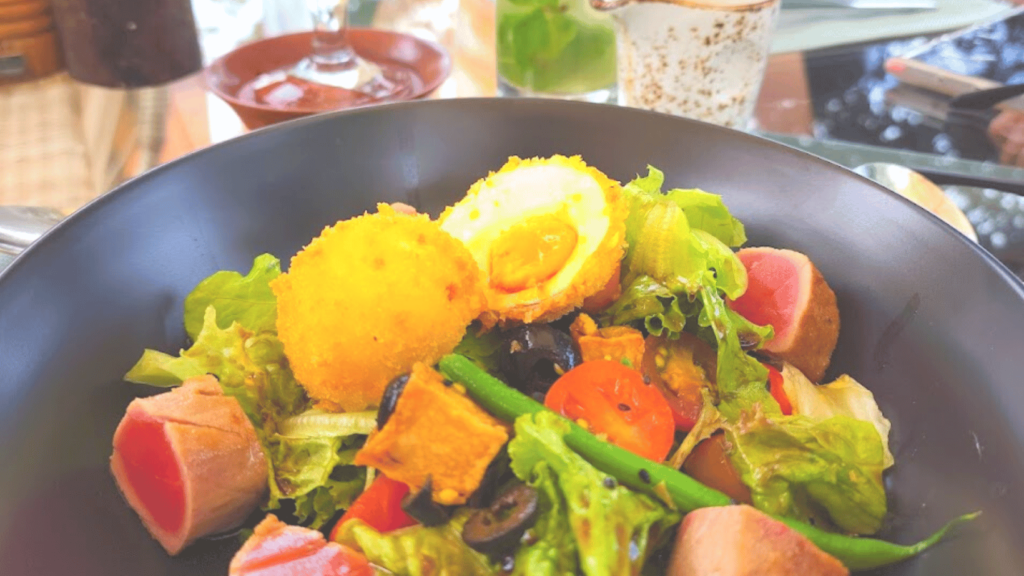 We hiked the surrounding mountains learning about medicinal plants used by locals for thousands of years, found incredible wildlife on the land and beach, and went frog hunting in the evening after a good rain. 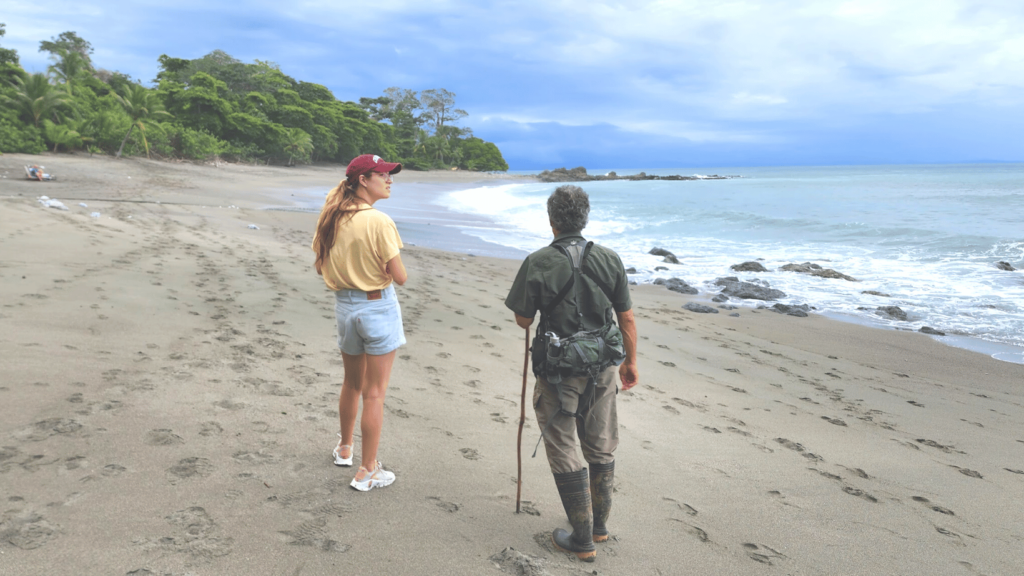 My daughter is a biology and environmental science major, so she was determined to see as many poisonous dart frogs as possible, and I think we did a pretty good job in completing that task. 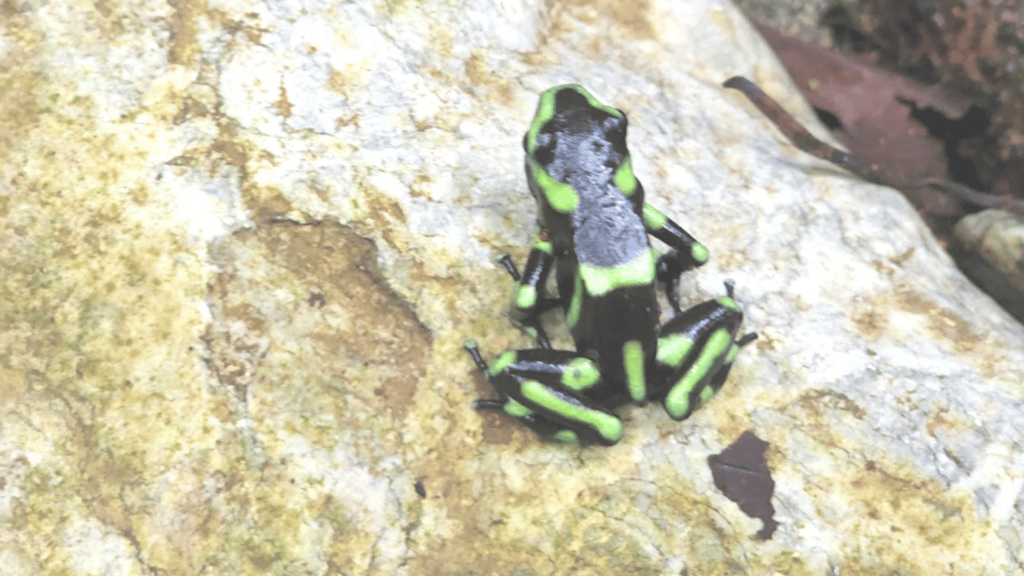 Bring mosquito spray. They do provide you with a lovely fragrant natural spray that smells like cloves, however, some extra lotion or protection would be a good idea. We were not prepared and I played connect the dots on my legs and arms for weeks.

If you love to eat fresh fish, go all in. The fish was probably sleeping in the ocean the night before it was served to us. Local fruit is also delicious and you should eat as much as possible!

Upon arrival, take a nature tour. You’ll learn which plants and animals are safe and which are not. Do not hike in the jungle in flip-flops, come prepared with solid tennis shoes. We were provided with knee-high rubber rain boots for hiking. I thought they would be cumbersome, but I can’t see hiking those hills without them!

Check your luggage, bags, and shoes. Try not to leave things on the floor. You’re in the middle of the jungle and you WILL get a hitchhiker. 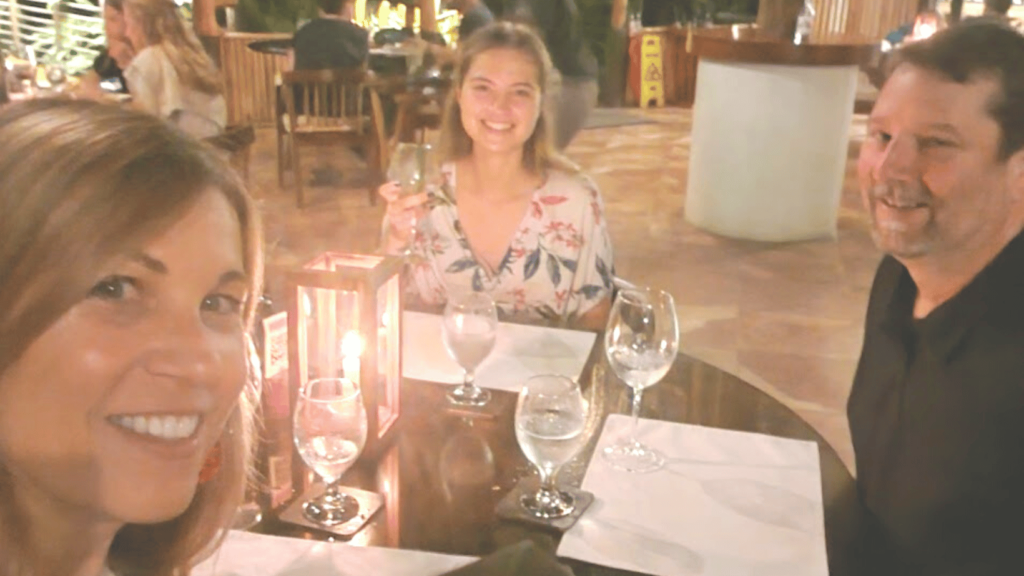 Tip. The resort is all-inclusive and you don’t have to tip every time you get a meal or drink. Usually, at the end, you tip per category – room housekeeping, bartender, wait staff, activities director and guides. We tipped during and after. We had such an amazing time throughout that we just kept tipping, it was hard not to as all of the employees were just so over-the top nice and would anticipate needs. Covid was very  hard on places like Costa Rica as they depend on tourism to much. I can’t say enough good things about the Ticos and we want to support them! 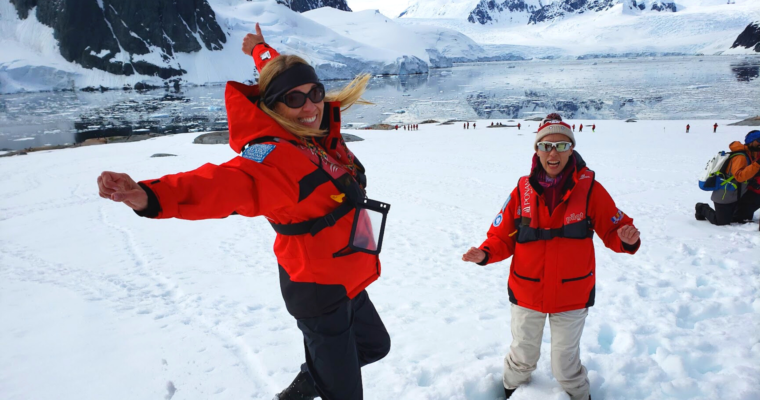 Must Have Experiences For Every Type Of Traveller

If travel is your first love, there are some experiences you must have in this lifetime. From the raw beauty of nature to manmade marvels, there is so much to see and experience around us. Travel is a force for good and it will allow […] 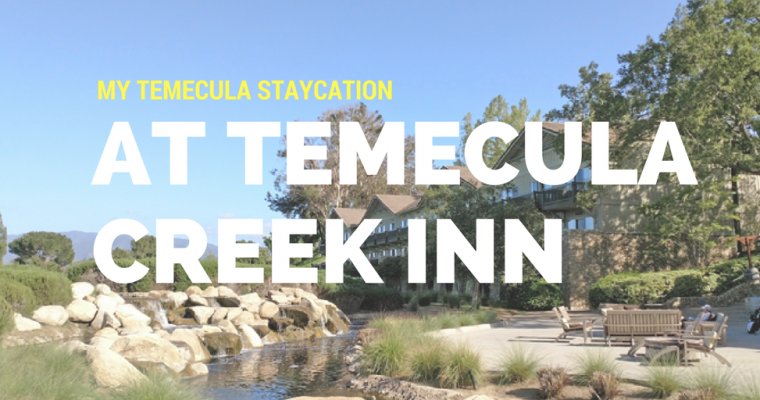 When I was selected to be April’s ‘Innfluencer’ for Temecula Creek Inn, I did a little girl scream and then went into planning mode. Temecula is about an hour and twenty minutes from my home, so I don’t get there often but I do love the area […]